Getting a Solo Parent ID in Quezon City

I am a single parent. Being a single parent is generally a challenge.  I take full responsibility in taking care of my child to the best of my knowledge and skills until such time he can fully take care and be responsible for himself.  Being a solo parent also has its benefits and privileges, some of them are identified in RA 8972 or the Solo Parent’s Welfare Act of 2000.  One can look it up on the net.  I was encouraged to apply for a Solo Parent ID now that my son is attending school for the first time.  He is attending school in one of the Day Care Centers supervised by the Quezon City Local Government in coordination with the Department of Social Welfare and Development (DSWD).

Here are the steps in getting a Solo Parent ID in Quezon City:

1.  Go to your barangay hall and request for the Barangay Certification certifying Solo Parent’s residency in the barangay for the last six months.  I brought a government issued ID for identification.  I was interviewed by the Barangay Captain himself before he signed the certificate.  I did not pay anything for this certificate which somehow surprised me, but I'm happy that our barangay provided it as a "free" service.

2.  Prepare an affidavit of circumstance stating the reason for becoming a solo parent.  Of course, this must be notarized.  Prices vary for this one. It depends if you prepare/print the affidavit yourself or have the notary public do it from scratch.

4.  You may need to bring income tax return or any document that will establish the income level of the solo parent.

7.  Fill-up an application form to be given by the social worker.  Along with this, you must submit the items indicated above (items 1 to 4).  You will be given a telephone number to check if you have been approved and if your ID is ready.  The social worker told me to wait for a week.

8.  After a week, I went to pick up my Solo Parent ID.  They asked me to sign a logbook.

I also encourage other solo parents out there to apply for a solo parent ID so that the government may have an idea how big the population of solo parents are in Quezon City.  Such will help them establish or create projects relevant to single parents.

Please note that a "solo parent", as defined by RA 8972 is (copied from http://www.gov.ph/services/solo-parent/):

1.  A woman who gives birth as a result of rape and other crimes against chastity even without a final conviction of the offender, provided that mother keeps and raises the child.

3.  Unmarried mother/father who has preferred to keep and rear her/his child/children instead of having others care for them or give them up to a welfare institution.

4.  Any other person who solely provides parental care and support to a child or children.

5.  Any family member who assumes the responsibility of head of family as a result of the death, abandonment, disappearance or prolonged absence of the parents or solo parent.
Posted by cris at 1:45 PM 9 comments: Links to this post

So you had your NC Assessment and you received a "Competent" rating. Congratulations!  You went to the courier service that process TESDA certificates.  You chose to pick-up the certificate. When you finally got your certificate the spelling of your name was incorrect. What do you do?

1.  Request letter from candidate. (Stating your intent.  Address it to TESDA)
2.  Original NC/COC (The erroneous certificate that you got)
3.  Letter for Assessment Center Manager (from TESDA, received by the Assessment Center)
4.  Picture (1 passport size, white background, with collar)
5.  Birth Certificate/Passport/Affidavit of Discrepancy
6.  Corrected RWAC from Assessment Center (Signed RWAC with the corrected name of the candidate only)
7.  Erroneous Fee (PhP 100)
8.  Go to the Assessment Center where you had your exam and they would gladly help you out with some of the items listed above (Items 3, 6).  They can also process the correction if you can provide them the items listed above (Items 1, 2, 4, 5) 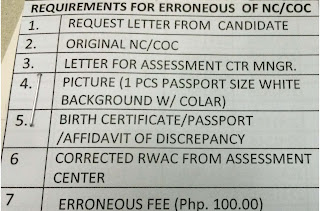 Note:  The above is subject to change without prior notice.  Please always check with TESDA if it applies to you.  Information provided is for informational purposes only.
Posted by cris at 4:28 PM 1 comment: Links to this post